Dogs. They absolutely love to lick and scratch themselves. The problem is that after surgery, this is the last thing that you want them to be doing. They are going to really want to do it. But, if you let their tongue or paws get anywhere near their wounds, it will just open them up. They could pull out the stitches, or even cause an infection. Luckily, dog cones can prevent this.

I know that your vet will probably provide you with a dog cone after surgery, but these tend to be rather cheap cones. I know that you want what is best for your dog, so I want to point you in the right direction of the best cone for a French Bulldog.

If you are feeling particularly lazy, then you can head on over to this link now; BENCEMATE INFLATEABLE CONE However, I want to review this cone in a bit more depth, just to tell you why it is so brilliant. I also want to provide a few alternatives.

What Is a Dog Cone?

The whole purpose of a dog cone is to prevent your French Bulldog from licking or scratching its wounds. Dogs have a natural inclination to do that. If you give them even half of an opportunity to scratch a freshly stitched area, then they are going to jump at it. It isn’t really like you can tell them to stop either. The dog is only doing what comes naturally to them.

A dog cone will prevent the dog from licking itself. They won’t be able to angle their head properly, which means their tongue is getting nowhere near the wound.

As I said, there are plenty of dog cones on the market. You could even make your own if you wanted. There is a very specific reason why I chose this option from Bencemate, though. It is all down to the fact that it is inflatable.

How Does This Dog Cone Work?

The traditional dog cone is a ghastly plastic thing. It looks unsightly, and it can often impact your dog’s vision. Obviously, they will get the job done, but neither you nor your dog will be all too happy about it.

The reason why I am picking this as the best cone for a French Bulldog is all down to it being inflatable. It is only really going to be covering up the neck of the dog. They still won’t be able to angle their head to get a good lick in. However, their vision won’t be obscured as the cone will go nowhere near their eyes. You probably won’t even need to take it off while your dog eats.

Honestly, it is a pretty simple concept. You inflate it and put it around your dog’s neck. It isn’t the most sophisticated piece of tech in the world, but it works.

Features Of The Dog Cone For a French Bulldog

Well, for starters, it is inflatable. I have already told you a little bit about the benefits of having an inflatable dog cone. However, the inflatable nature also makes it dead simple to store when you aren’t using it. I don’t know if you have ever tried to store one of those plastic dog cones, but boy is it hard!

Despite being inflatable, this is a pretty rugged piece of kit. Your dog isn’t going to be able to destroy it. In fact, there are some people that have even used this as a doggy pillow or a toy after it has served its purpose as a dog cone. I know that French Bulldogs can get a bit frisky with their play, so it is probably good to have something that they can’t completely destroy, right?

Being inflatable also helps to ensure that it is comfortable. With one of the more traditional plastic cones, it is not uncommon for the plastic to start to dig into the skin of the dog. It can be incredibly painful. That isn’t a problem with this dog cone. It is soft on the skin. There are no areas where it can really ‘dig in’. As I said, it can even double as a pillow!

Being inflatable helps to ensure that the dog cone is nice and lightweight. Your dog will barely know it is there. Sure, it will irritate them as it means they can’t actually lick themselves. But, it is doing them good in the long run. At least it won’t be as frustrating as having a plastic cone wrapped around their neck!

This dog cone is available in a few different sizes. If you have a French Bulldog, then I recommend that you pick up the large size, just to help ensure that it wraps around their slightly thicker necks. Don’t worry if it is not a perfect fit. There is a velcro strap that will easily allow you to adjust the size of the cone. This means that you could easily purchase this dog cone when your dog is a puppy, and it can see them through the rest of their life (one of the perks of having a dog cone that is inflatable!)

To cap it all off, the BENCEMATE inflatable dog cone has a stylish design. Who would want to look at a piece of transparent plastic, when you could be looking at a colorful donut? 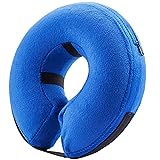 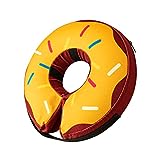 Adjustable strap
Yes
Delivery
Where to buy
Buy on Amazon

While I firmly believe that the cone that I have discussed on this page is the best that money can buy, you may also want to check out a few alternatives:

Want the best cone for a French Bulldog? You really do need to pick up theBENCEMATE INFLATABLE CONE . Not only is it stylish, but it is going to help protect your dog’s surgery wounds without being too inconvenient. It is comfortable for your furry friend. It won’t prevent them from eating. It won’t even hinder their eyesight. However, it will protect them from tearing out their stitches or giving themselves an infection.

Can a French Bulldog remove an inflatable dog cone?

They shouldn’t be able to, no. While these dog cones tend to be secured with velcro, the velcro should be quite ‘out of the way’. This means that the dog shouldn’t really have an opportunity to tear the cone off.

How long does a dog need to wear a cone after surgery?

The vet will provide advice on how long a dog should wear a cone after surgery. It will normally be until the stitches have healed, which can take several weeks.

Do you need to remove a dog cone when they eat?

Not if you have an inflatable cone, no. If you have a traditional dog cone, then yes.

Can a dog wear a dog cone while they sleep?

This inflatable dog cone is comfortable enough for a dog to wear while they sleep. You would have to remove a more traditional cone.

If your dog has to go in for surgery, which is an uncomfortable time not only for your Frenchie but for the owner you want to make it as comfortable and stress-free as possible. So that being said you want to go for the best cone for a French bulldog.

What you’re given at the vets in an uncomfortable big cone which makes feeding, sleeping, and daily routine that bit more difficult. We recommend an alternative to make life that bit easier and stress-free.