Licking is a form of communication for French bulldogs. However, excessive licking may indicate something more serious like a medical issue. There are various reasons why your Frenchie keeps licking you, including to show you affection, relieve their stress, reduce your anxiety and more.

Continue reading to learn more about why your French bulldog keeps licking you, what this licking might be an indication of, and how to stop your Frenchie from licking you continually.

Your French Bulldogs May Lick You to Show Affection

We all know that Frenchie’s are one of the world’s most loving dog breeds. Frenchie’s adore spending time with their owners and following them around. So, if your Frenchie licks your face or hands every time you praise him, he’s only trying to show you how much he adores you.

Your Frenchie probably likes to lick you when you return home from a long day of work. The sound of the door opening is, without a doubt, one of the happiest moments of your little pup’s life. Your Frenchie will always run to hug you like they haven’t seen you in years.

Your French Bulldog May Lick you to Reduce their Stress

If your French bulldog is continually licking you or themselves excessively, is it advised you urgently investigate the source of the problem. In most circumstances, a dog’s persistent licking of their body parts is one of the ways they cope with stress. Excessive paw licking, for example, can promote yeast development and the spread of other illnesses.

Increased exercise and anti-anxiety vitamins or pharmaceuticals may be useful depending on the source of stress or worry for your Frenchie.

We recommend a licking pad to reduce stress and anxiety 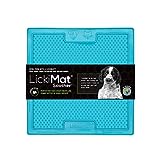 It is totally acceptable to lick to ease nervousness on occasion. However, if your dog continues to lick, it may develop into an obsessive-compulsive disorder. Licking carpets or blankets is another sign that the activity is anxiety related.

If your French bulldog’s licking began as a result of worry but has since become more frequent or in new settings, it may have escalated to a compulsive activity that they are unable to stop on their own. Consult your veterinarian to see whether your dog’s excessive licking is due to a compulsive condition.

Since OCD in pets is triggered by stress, it is critical to determine what environmental stresses may be causing the compulsive licking.

Excessive Licking from Your French Bulldog Can Indicate an Injury

Suppose one finds that their French bulldog is licking themselves excessively. In that case, it is recommended that every Frenchie owner inspect their dog’s paws regularly for trapped plant fragments or other dangerous components.

It’s worth noting that strolling on scorching streets in the summer might also cause your gremlin to lick his paws excessively.

It may seem disgusting to you, but the more stinky and saltier we get, the more appealing we appear to our pets. Unfortunately, your French Bulldog will find your salty skin appetizing. They usually explore the world using their mouths and noses. If your dog appears to be licking you excessively, take a shower.

Dogs are very clever critters capable of sensing our emotions. That’s why it’s not unusual for your French bulldog to lick you when you’re frightened or upset. Our dog’s goal is to relieve stress by licking our hands, feet, or face. In those instances, your French bulldog merely wants to be your strongest ally.

Should I be Concerned of Any Health Problems if My French Bulldog is Licking Excessively?

There’s no need to stress if you see your French bulldog licking its lips when you bring over a dish of food or when you give them a treat for doing a trick.

On the other hand, excessive licking might indicate a variety of problems, including discomfort, anxiety, and allergies. If you see your pet licking excessively, call your veterinarian and arrange an appointment for a check-up.

Licking is one method of pain relief. If your French bulldog is licking the same region repeatedly, there’s a high likelihood something is troubling them in that area. Examine for lumps, lesions, and foreign things, and watch how they move to see if arthritis or an injury is the source of the problem.

If you suspect your Frenchie is in discomfort, contact your veterinarian. They will be able to assist in the diagnosis of any issues as well as give pharmaceutical alternatives.

Excessive Licking Could Indicate Allergies in Your French Bulldog

Itchy skin can sometimes cause excessive licking in a specific location. Examine your French bulldog for any hives, rashes, or fleas that may be troubling them.

If your French bulldog has just been outside, it might be a reaction to an allergen in the environment, especially if the problem is on or near their feet. Bathe your Frenchie in warm water to eliminate any possible irritants and soothe their skin.

Excessive Licking in Your French Bulldog Could Indicate Dietary Issues

Since French bulldogs have delicate digestive systems, licking might indicate nausea or gastrointestinal distress. Many dogs are sensitive to grains, carbohydrates, and soy. The diet of chicken or beef can also harm them as some dogs can have severe allergies to these proteins in their dog food.

Consult your veterinarian about moving your dog to a grain-free, non-GMO food containing grass-fed meats, such as Nutro Wholesome Essentials Dog Food. Any dietary adjustments should be implemented gradually. Over many days, gradually introduce the new food into their usual diet, increasing the ratio until she is accustomed to the new flavors.

If you’ve ruled out a potential medical cause for your French bulldog’s licking, the problem might be behavioral. Frenchie’s lick to release endorphins, which make them feel fabulous. French bulldogs lick their fur to condition it, and they frequently demonstrate devotion by licking their pet parents, much like their moms did to them. Licking is just a behavioral reflex for some puppies.

Furthermore, dogs kiss us because they enjoy us. Dogs experience the world around them by using their senses. We pay attention to their “kisses,” and positive reinforcement educates them to repeat the behavior.

Excessive Licking in a French Bulldog Could Indicate Gastrointestinal Issues

Your French bulldog may be licking to relieve nausea, which can be a sign of a more serious medical problem. If your dog’s licking problem is caused by nausea or gastrointestinal problems, a change in food or drugs tailored to your dog’s needs may be the answer.

Schedule an immediate appointment with your vet if your French bulldog’s licking is accompanied by vomiting, diarrhea, or a loss of appetite. A recurrent upset stomach might result from anything as simple as food intolerance, but it could also be a sign of pancreatitis, irritable bowel syndrome, or other GI problems.

Canine cognitive dysfunction syndrome (CDS), which is related to Alzheimer’s disease in humans, afflicts 14% of canines aged eight and up, with the frequency rising with age.

Repetitive activity, including licking, chewing, circling, and so on, is one of the numerous indications of CDS. If you suspect your French bulldog could be suffering from CDS, talk to your veterinarian about other symptoms.

A loose or painful tooth might alter your dog’s biting pattern, causing them to lick at the air in an attempt to shift the tooth or alleviate the pain. At each yearly check-up, inquire about your dog’s oral health.

Dogs, like people, require dental care, which includes expert cleanings. Book an appointment with your local vet for a complete oral exam if your dog has halitosis, poor breath, excessive drooling, difficulty picking up food, or licking their lips, teeth, or the air excessively.

How to Prevent Excessive Licking in Your French Bulldog

The underlying reason why your Frenchie is licking will determine how to prevent the behaviour. Minimizing situations that produce excessive worry and tension, eating a high-quality meal prepared to fulfil nutritional requirements, providing enough high-quality, durable playthings, and providing daily exercise time are some approaches to help your dog stop licking excessively.

You can also limit your French bulldog’s excessive licking by avoiding exposure to trash and garbage, following your veterinarian’s recommendations for yearly examinations and dental procedures, and brushing your dog’s teeth daily.

Is It Normal Behaviour for My French Bulldog to Lick the Air?

While humans may not always understand what dogs are trying to communicate when they lick the air, it is totally natural. The most important question is whether the licking is a cause for concern.

There are several reasons why French bulldogs lick the air. By licking the air, your dog can improve their sense of smell, transmit worry, treat an upset stomach, and so on. Occasional, brief episodes of air-licking are not reason for concern, but you should be on the lookout for increases in the amount of time or frequency spent licking.